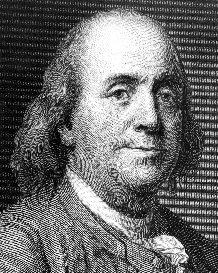 Benjamin Franklin was a man of action. Over his lifetime, his curiosity and passion fueled a diverse range of interests. He was a writer (often using a pseudonym), publisher, diplomat, inventor and one of the Founding Fathers of the United States.
His inventions included the lightning rod, bifocals and the Franklin stove. Franklin was responsible for establishing the first public library, organizing fire fighters in Philadelphia, was one of the early supporters of mutual insurance and crossed the Atlantic eight times. Self-development was a constant endeavor throughout his incredible life.

Benjamin Franklin was clearly a man who knew how to get things done.

Here are 14 action-inducing lessons from him:


Read more: http://feedproxy.google.com/~r/DumbLittleMan/~3/DWbgFnI_6wc/14-action-inducing-lessons-from.html#ixzz1toPAUHAy
Posted by Life with Emickkah at 4:38 PM